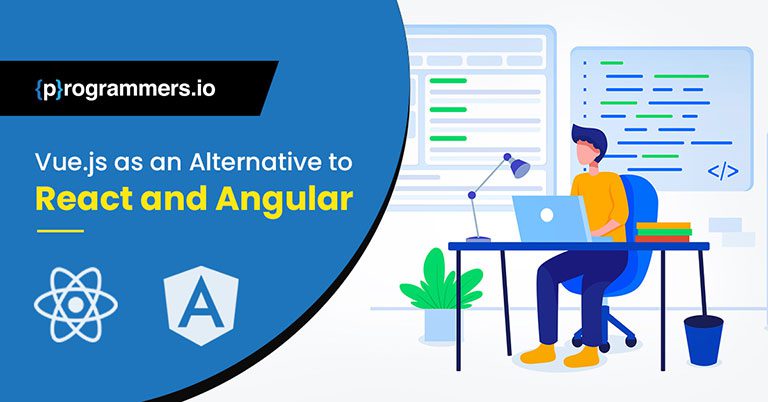 Not too long ago, developers and startups were deciding between Angular and React for their long-term development projects. However, the tides have changed now, and there is a third player in the mix as well – Vue.js.

We now know that Angular, React and Vue.js stand above the rest when it comes to the best JavaScript frameworks to work on. However, the rise of Vue.js has only made the choice harder for developers. While developers were previously choosing between Angular and React, they now have to find the best fit between three top-notch development frameworks.

Both Angular and React are managed by the same parent firm, while Vue is a framework managed by developers and volunteers constantly looking to help it grow and make it a force to reckon in the market.

Vue.js hasn’t disappointed users in its early days of infancy and is the fastest growing platform globally right now. The framework is now being used by major names such as GitLab, Alibaba and Sequoia among others.

In this article, we take a look at how Vue.js can prove to be a solid alternative to both React and Angular. Stay with us as we understand the possibility of Vue.js as a viable option over the other two.

VueJS is pretty similar to React and Angular, as it is a library based on JavaScript for building decent web app interfaces. VueJS comes with an effective architecture, which can help developers build and maintain applications based on complex code.

Despite providing advanced support for server-side routing and rendering, VueJS strives not to be overly complex for all new developers and followers. The platform was first released in 2013 and has grown to achieve almost 200k stars on the review site of Github.

Most developers already know the feasibility of Vue.js and how it is slowly and gradually replacing React and Angular. Those that don’t can go through this article to find the exciting features.

Reasons to Use VueJS Over React and Angular

The recent growth curve of VueJS has been quite impressive. The framework has overtaken many other developing environments and has grown by leaps and bounds during the recent past. Let us look at some of the reasons that make VueJS a good choice over others, such as React and Angular.

VueJS comes with a virtual DOM, which suggests that it can incrementally work within any environment. Unlike the likes of Angular and React, VueJS is engineered to work incrementally. What this means for the average firm and developer is that they can easily convert an existing page based on HTML to other sources to see a drastic increase in performance.

Virtual DOM is a powerful agent that can also help inflict changes over the board. The changes made through virtual DOM are local and can be implemented without impacting other sections of the application. What this means is that the section you are looking to upgrade can be upgraded without disturbing any of the other sections.

The best part about Vue.js is that it can effortlessly integrate with React. The seamless integration model ensures that developers can use whichever model they are more comfortable with for their React development. The front-end libraries and frameworks used need to integrate with the backend work.

The integrations can make working on Vue.js a lot easier, as developers are connected at all hours. Additionally, there is also the added bonus of creating solid web apps that are connected across the backend and frontend.

The syntax for Vue is clear and concise in nature. The syntax can be used to perform simple tasks in a periodic manner. A concise syntax makes sure that developers working on the process are able to write complex code during their operations.

JavaScript has gone through explosive growth during the last few years on the back of the small learning curve that it offers to users. The small learning curve can make it easy for developers to pick up new tasks easily and integrate them within the overall package. Additionally, since the overall JavaScript environment is growing at a rapid pace, there is also a network of dedicated developers available to help you out.

As we have also briefly discussed above, VueJS is extremely adaptable. The incremental growth structure of the platform ensures that all users and developers working on it can use other libraries alongside.

The code structure in VueJS can seamlessly fit within any codebase that is based on an HTML template and CSS style. The highly flexible nature of VueJS comes in handy for developers on the go who have multiple applications available to them. The environment can be used together with other libraries and tools such as Firebase, Nuxt and Serverless Framework.

If you are building a new web app, and aren’t really familiar with the kind of framework you would want on it, then we will recommend you to start working with Vue. Vue is literally one of the easiest JavaScript frameworks to learn and is quite simple in comparison to React and Angular.

VueJS can also be a good option if you want to migrate your application from React or Angular to another framework. The syntax and structure of the framework is helpful and can help you in the integration process. All in all, VueJS is a simple yet effective framework for developers to work on. The framework can serve as a decent alternative to React and Angular, and might soon even leave them behind.