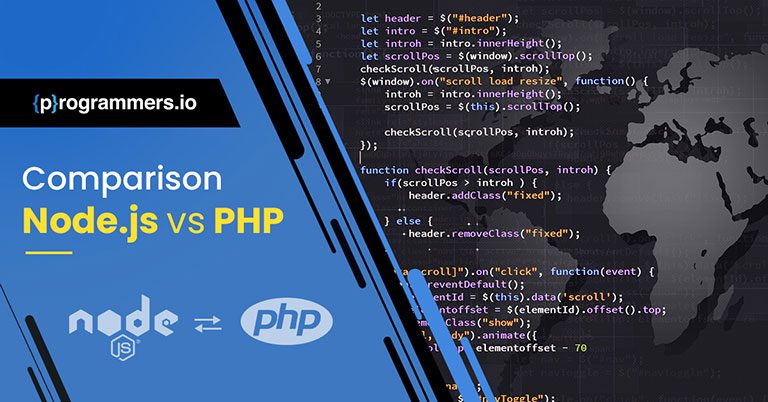 PHP has been serving developers for over three decades now and is now a major part of the apps and websites that we see on the web. Node.js, on the contrary, is relatively new and is expanding at a remarkably fast pace. The programming language is becoming a popular choice for developers because of the full-stack approach that we discussed above.

When it comes to choosing the right programming language, developers face one big question; which of the two should you pick for the next project you work on – should you go for the robust and fast operations of Node.js, or should you depend on the proven efficiency of PHP to power you forward.

Both PHP and Node.js can be excellent options for the future, but you need to know and compare both in detail so that you can make a conscious decision. In this article, we take a look at the comparison between Node.JS and PHP. Stay with us for more.

Node.js is an open-source, runtime environment that is single-threaded in nature. The environment can develop fast applications and consists of the extremely robust Google V8 runtime engine. The real-time application development on Node.js is faster than you’d see elsewhere.

Reasons to Use Node.js

A recent survey by Stack Overflow in 2021 found that over 36 percent of professionals used Node.js in some capacity for development in the year 2021. The popularity of Node.js can be attributed to the list of benefits it carries. Some of the reasons to use the environment include:

Read:  When to use Node.Js Development

A number of popular websites and platforms use Node.js today in one form or the other. Some of these include:

Node.js does come with a few disadvantages as well, which include:

PHP was initially known as Personal Home Pages, which later changed to Hypertext Preprocessor. PHP is an open source, object-oriented language that primarily works towards web development. PHP is mainly used for creating dedicated web servers. PHP development can easily be executed through a command line

PHP works on the Zend Engine, which is mostly used in regular web apps. However, Facebook has built multiple different versions of PHP including JPHP, Parrot and HPVM. PHP 7.4 or 8.0 comes with additional performance and is the best version to use.

Reasons to Use PHP

The Stack Overflow survey in 2021 found that almost 22 percent of all developers use PHP today. PHP was recently called a dead programming language, but it has withstood those allegations on the back of the reasons below:

PHP does come with a few cons as well, which include:

Both Node.js and PHP offer one-of-a-kind solutions based on their unique characteristics. You can make a refined decision after going through this comparison of PHP and Node.js.