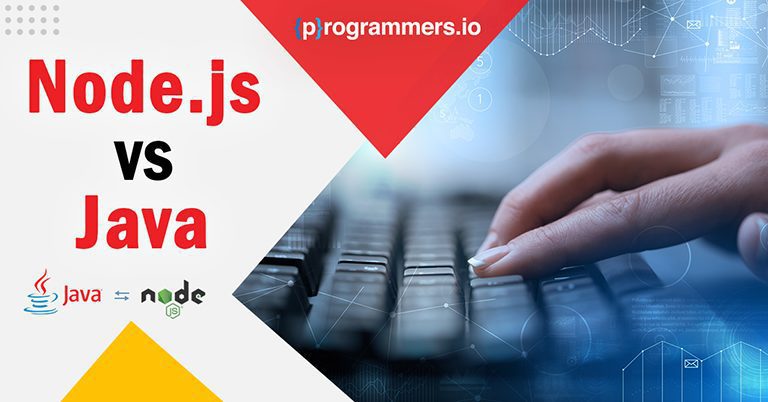 Industry Matters
By Amarendra on November 25, 2022

The choice between Node.js and Java is highly dependent on the project requirements and your team’s experience level. Both are powerful technologies that come with their own advantages and disadvantages, so it’s important to weigh each option carefully before making a decision.

Node.js has become increasingly popular over the years due to its lightweight design, scalability, speed of development, and an abundance of modules for performing common tasks quickly and easily. Since Node.js is based on JavaScript, developers familiar with this language can work with it more efficiently than other languages such as Java or C++. Additionally, Node.js allows developers to create real-time applications with ease due to its event-driven architecture.

On the other hand, Java is a mature language that has been around for decades and is widely used in many industries. The JVM (Java Virtual Machine) makes it easier to create robust, cross-platform applications, and the vast ecosystem of third-party plugins and libraries can help speed up development time. Additionally, Java is suitable for large projects with complex needs as its strong typing system ensures more reliable code.

In conclusion, whether you choose Node.js or Java will depend heavily on your project’s requirements and the skillset of your team. If you need real-time features or if your developers are experienced in JavaScript then Node.js may be the right choice. However, if you need a more stable environment with more advanced features then Java may be the better option. Ultimately, the best technology to choose will depend on your specific needs and requirements.

Comparison between Node.js and Java

Node.js and Java are two of the most popular programming languages used to create web applications today. Both languages offer a wide range of features, making them suitable for different types of projects.

In terms of performance, Node.js is known for its fast execution time and low memory usage compared to Java. Node.js makes it ideal for creating highly responsive applications with less overhead than other languages.

Read about Node.js for Online Business

Read: Things to do with Java

In terms of scalability, both languages are capable of scaling up or down depending on the project’s requirements. However, Java is better suited for larger projects due to its enterprise-grade infrastructure and ability to handle large amounts of data.

When it comes to development speed, Node.js has an edge over Java as it requires fewer lines of code and makes deployment faster. Additionally, Node’s asynchronous nature allows developers to perform multiple tasks at once instead of waiting for one task to finish before starting another one. On the other hand, Java offers a more comprehensive set of libraries which can make development more efficient than with Node.js but also slower compared to using only Node.js frameworks and libraries.

Overall, both Node.js and Java are excellent choices for web development projects. Depending on the project’s requirements, developers should choose the language that best fits their needs. For highly responsive applications with low memory usage, Node.js programming is a better option while Java is more suitable for larger-scale systems development.

Both languages also offer scalability, but Java is better suited due to its enterprise-grade infrastructure and powerful libraries available. In terms of development speed, Node’s asynchronous nature makes it faster than Java; however the latter has access to a more comprehensive set of libraries which can make development more efficient in certain scenarios.

So ultimately it really comes down to the specific requirements of each project when deciding which language to use.

Node.js vs Java: Which is better?

In the world of software development, two of the most popular technologies are Node.js and Java. Both offer great features, but which one is better for use?

Node.js is a JavaScript-based technology that allows developers to write code that runs on server-side applications. It has grown in popularity due to its scalability and flexibility, making it a great choice for building real-time web applications such as chatbots and streaming services. Node.js is also relatively easy to learn compared to other coding languages – even beginners can start working with it quickly without having to dive deep into complicated programming concepts.

Java is an object-oriented programming language that was created more than 20 years ago by Sun Microsystems. Despite its age, it is still widely used and has been adopted by many companies for developing web applications, mobile apps and enterprise software. Java is a powerful language that can be used to create robust back-end systems, but its learning curve may be steep for some developers.

Both Node.js and Java have their own strengths and weaknesses, so which one is better in 2022 depends on your particular project’s needs. For example, if you’re creating a real-time application that requires high scalability and flexibility, then Node.js might be the better choice since it offers those features easily. On the other hand, if you need an enterprise system with complex functionality and logic, then Java programming would likely be more suitable due to its robust capabilities.

In the end, it’s up to you to decide which technology is better for your project. Ultimately, both Node.js and Java are great tools that can be used in a variety of scenarios. The best choice will depend on your individual needs and preferences. No matter what you choose, you’ll likely have an excellent experience with either one!