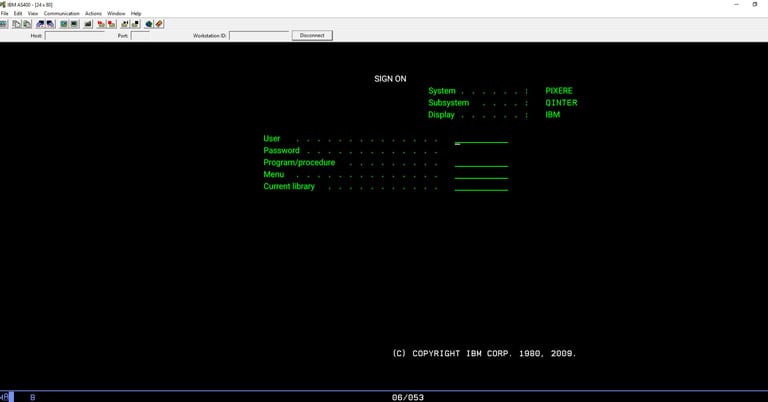 Software & Technology
By Nirmal on December 9, 2020

IBM i has evolved over the years. Begun as an AS400 server series, the IBM iSeries and Power Systems come with many useful features the users cannot stop raving about. In the past, AS400 supported only green screen applications.

The standard user interface (UI) for this world-famous system was a rectangular screen 80 characters wide by 24 lines high. The presence of an abundance of monochrome cathode ray tubes (CRTs) using P1 phosphor, resulted in the term ’green screen’. Since then, green screens show up in many online mainframe-based applications.

It was in the mid to late ‘90s, when IBMI AS400 was introduced to a new UI known as the “Graphical User Interface,” or GUI. The GUI was invented for distribution-based applications and it was not limited to 80 x 24 characters. The GUI provided a lot more space and features. New developers started taking interest in GUI based applications and customers saw it as more user friendly and interesting. Soon, green screen UIs began to lose their popularity and GUI’s began to take over. Graphical User Interface is not only attractive but they enhance the user experience and usability of the application.

The green screen UI looked dull and more like a complex interface that only geeks could love. This complexity motivated developers to look for user friendly interfaces. This figure shows the history of popular approaches to UI from the early 1990’s.

Of all the approaches or methods shown in the chart, APIfication and UI frameworks are the latest and the most trusted methods to modernize IBM i applications. Modifying legacy IBM I application to the latest version is recommended because the current state of IBM i has many extraordinary features.

The AS400 application can be modernized using cloud-native techniques, such as microservices, docker containers, decoupling, data analytics, artificial intelligence, and machine learning services.

Application modernization can also involve dividing or breaking down a legacy application into a collection of smaller components or microservices. 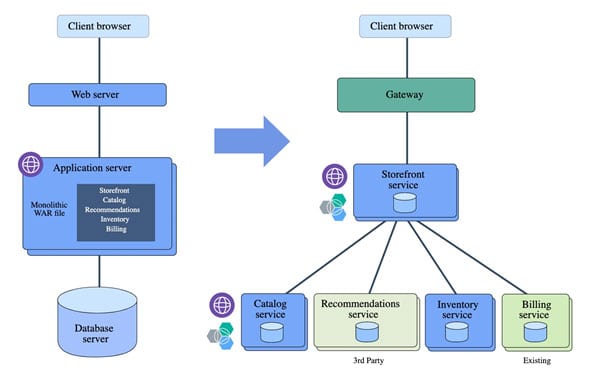 In the illustration, a single application is divided into a collection of microservices or individual services within the app. Each service would have their own database and data model.

Cloud migration is one of the modernization processes that involves microservices, re-platforming or re-hosting. During this process, IBM provides a nest migration approach to your enterprise. Cloud migration for your IBM i application involves a complete plan, various migration options and ROI calculation.

A legacy IBM i application can be enhanced by securely exposing its functions or data via APIs without hampering its existing code. This approach enables new, cloud native applications to leverage the capabilities of existing systems and data.

How does APIfication work in modernizing AS400 applications?

Benefits of APIfication and frameworks:

Angular is a typescript based open-source web application framework. The applications developed using this framework are very progressive, faster and user friendly because of the spot-on UI features. The components of an Angular application include: view, styling, and controller/model. These three components define the entire application. Modular framework is essential as it extends the application’s capabilities.

For application modernization, layered architecture is recommended, and Angular framework is one of the best when layered architecture development is required. Middle processing tier is counted as the most important in a multi layered application. It is important because it acts as an API gateway, handles security and adopts validations. Modernizing an IBM i application also involves development using Java, Node.js or Python.

The middle tier needs to be connected and for this the RPG logic has to be exposed. IBM IWS is used to expose the logic in the form of REST APIs.

IBM is pushing companies to modernize their green screen RPG applications to Java/J2EE. Organizations are opting for other options, such as ASP.net, but most of them are trying to follow the IBM road map that clearly indicates migration to Java.

Java as a language tends to promote better separation of code. In general, Java offers everything as a service program, where all parameters are passed with VALUE set, OPTIONS (*no pass: *omit) is disallowed, CONST is generally recommended, and most parameters are of type DS (data structures) and passed around by pointer.

The green screen applications built in RPG/Cobol are now being easily migrated to modern platforms or open environments like Java. Many developers try to rewrite entire pieces of code in Java, but this procedure has resulted in poor outcomes because RPG is the language of IBM i and for mission critical and enterprise applications there is no other option than RPG. Enterprise Applications can be modernized by leveraging the talent of RPG coders with the help of REST APIs. And this is the best way to switch from legacy to an open world.

For example, RPG have an open access tools like Profound UI ,LANSA for application modernization  that preserves the existing RPG code source and are used by many organizations.

The latest version of the tool provides these features:

Legacy applications, especially those that have green screens, require modernization to meet the demands of today’s every day user. RPG has always been the primary language compatible with IBM i. Often, migrating an application completely to some new platform is not feasible. Therefore, methods like integrating APIs is recommended to change the interface of your application and keep the code you trust and have invested in. Organizations migrate to other platforms thinking there are no IBM i experts left, as many IBM i experts are at the retiring age. But there are organizations that have in-depth expertise in maintaining your IBM i/AS400 system. To proceed with the modification process, always get an expert’s advice. Expert advice can help you deliver a new interface that your user’s can rely on with minimum disruption.