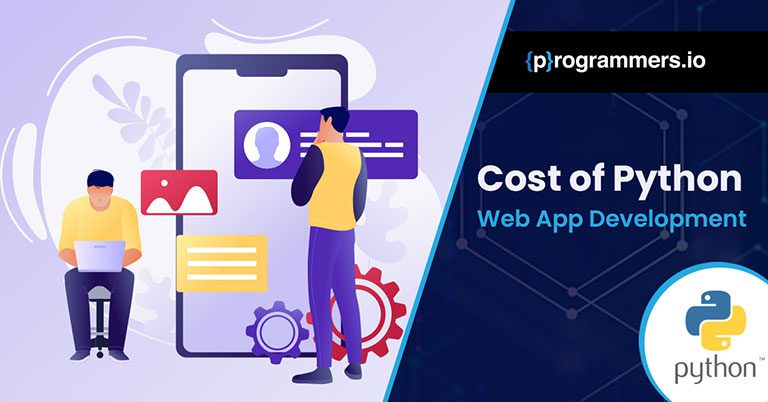 So, you’re budgeting for a new e-commerce app. Maybe you’re planning on launching a food delivery service. You researched that enterprise companies like Netflix, Instagram, Spotify, and Google, are python apps.

But when you reach out to the best python programmers, you cringe. Yes, custom python app development services cost between $3,000 to $30,000. However, the final cost of your Python app depends on what you need.

Don’t let the cost of web app development scare you off. Instead, read why python app development is still the best for your business needs. When you finish reading, you’ll master how to budget for the best python programmers.

Over 30 years, the best python programmers have benefited from frequent python upgrades. As a result, older python apps can run on older Python libraries and code while benefiting from new libraries.

In contrast, developers can’t upgrade web apps built with Angular to Angular 14. The same is true for Vue 2 web apps with Vue 3.

Python apps are costly because of elite Python frameworks like Django and Flask. And all Python libraries incorporate third-party plugins into their core. The best python programmers factor these costs into the web development process.

The maintenance costs also factor into the price of a python app. Also, web developers know how to place web apps on live servers. Paying for this expertise saves considerable time.

Your Python app will need to be maintained or upgraded. Python is a versatile and scalable programming language. If your web app grows in features or scope, developers must work on the app.

It’s best to budget this vital web app development in advance. Not having a functional or viable website can prove more costly.

The features of your specific Python app influence the price. It also mandates the time factor for completion. For example, some web apps might only require feedback or a contact form.

In that case, the best python programmers shouldn’t be overcharging you. Nor should it take months to complete the web app development.

On the other hand, if your Python app features databases, APIs, or data analysis, the time and cost increase. If you need a ride-sharing web app, expect to pay for advanced features like Google Maps, payment gateways, GPS, scheduling, and chatting.

We recommend consulting with python developers on your Python app’s specific features and needs. Failure to do may result in overpaying. Of course, you can visit our python app services page.

The best python programmers understand the importance of security for web development. Expect to budget for security features if you’re app deals with consumer data. Recent reports project that businesses will spend more than “$170 million on web app security.”

Python and its frameworks, like Django, work in the back end. Back-end web app development is where custom programs and functions work for users. The front end involves the graphical interface that users interact with.

Roughly “60% of website visitors prefer well-designed web apps.” So consider the importance of your Python app’s visuals in your budget.

The best Python programmers are fluent in back-end and front-end web development. Python is a natural object-oriented programming language that functions in the background. But Python works well in web app development by integrating front-end frameworks like Vue.

Another cost consideration for Python web apps is SERPS. SERPS is short for search engine optimization. The faster your web app, the greater the ranking on search engines like Google.

Angular, Vue, and React are popular because of their blazing-fast page loads. They all work well as front-end interfaces for your Python app. However, these different frameworks impact your budget.

The best Python programmers have access to nearly “150,000 Python libraries.” This feature dramatically speeds up the web app development process. As a result, the overall cost should be lower.

However, some Python apps require more custom functions and libraries than others. This results in a higher price for custom Python app development services.

4) The Time to Build

Some web developers charge per project, while others charge by the hour. Small Python apps can take anywhere from a month to two months.

But if the Python app development involves data science or artificial intelligence, expect to pay more. Python excels in data science web development. But apps of this nature can take six months or longer to build.

While it might seem tempting to build your web app cheaply, it might not be wise. Giving an inferior web app to your clients may result in them abandoning you. In addition, you will have to spend unnecessary funds for reliable custom Python app development services.

Other factors for budgeting your Python app are the number of team members. Extensive web apps usually require quality control checks and testing. This factors heavily into the final costs.

Don’t hesitate to contact us about hiring our app development services. You can also read our blog for the latest web app news and trends.