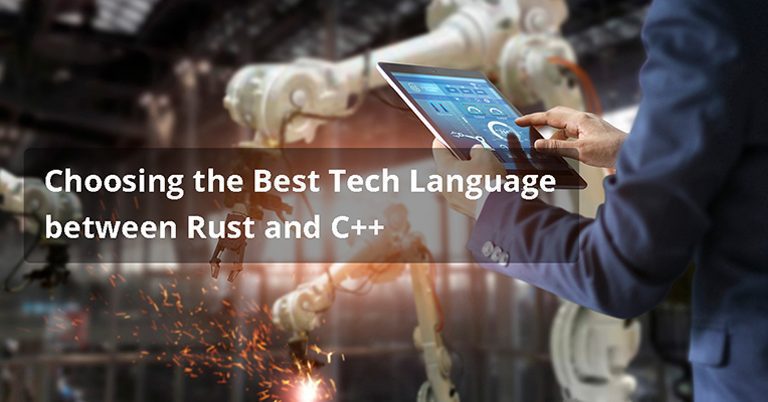 Rust and C++ are two very important components in the field for IoT development. Both these languages are utilized in instances where access to memory and controllers, direct connection with hardware, and performance speed matter the most.

IoT or the internet of things has come a long way during the recent past, and there are discussions on where it can go from here. While the technology takes the limelight, there are object oriented languages such as C++ and Rust in the background, powering the change forward.

In this article, we run a comparison between Rust and C++ and find out just how they compare to each other. We hope you can find a distinctive difference and choose one for your project by the end of this article.

Rust was developed by Mozilla back in 2010 and is a popular system-level programming language that aims to provide exceptional safety standards. The language is designed to manage and minimize certain complications during the designing process.

The language reduces inefficiencies related to memory and provides concurrent programming facilities. Rust has a pretty good syntax and was popularly named the most loved language by developers for five years on the trot. The versatility of the language adds to its popularity, making it more loveable with time.

Rust is also used in Mozilla’s Firefox browser and ensures the best garbage collection methods. Rust is categorized as a low-level language because it comes with exceptional control possibilities. The manual memory management feature also enhances the feasibility of Rust, making it a must for developers working on IoT products.

C++ is known to be a more old-school language in comparison to Rust. This object-oriented language was first coined back in 1995 and has come a long way since then. C++ changed the role of the C language and was designed as a revolutionary solution that boasted immense power and standard.

A majority of all Microsoft projects have been designed using Visual C++ or simple C++. All of Windows 95, 98, 200, XP and ME were designed through C++ programming.

C++ comes with a pre-determined coding structure, which leads to faster performance and is praised for reusing coding modules. The multi-purpose use-case of the language allows you to use it on a range of products, including user interface applications and sophisticated 3D visuals, business packages and desktop games.

Rust vs. C++: Quality and Pace of Coding

C++ is what we call a dynamically-typed language. There aren’t enough measures in place to prevent coding measures and to spot problems before compiling a program. Rust, on the contrary, is a statically-typed language and comes with numerous improvements. The process for validating the code on Rust is more rigorous than it is on C++.

Rust also puts additional emphasis on code security and quality, ensuring optimal performance for programmers. Developers working on Rust agree that the programming process and the semantics are well-organized on Rust, making it easy to work on for developers.

However, coding on both C++ and Rust can be difficult for newbies to manage. New developers will find both these languages hard to master.

When it comes to community and talent pool, C++ beats Rust hands down. The platform is host to some 5.5 million developers in one space. The Rust community is almost 5 times smaller than that of C++, as there are less than 1.5M developers working on it currently.

Rust users have a number of issues to figure out on their own, which C++ developers can find answers to using community forums and answers. Rust can eventually be costlier and more time-consuming to work on because there is no predefined path to success.

As you may know by now, there are innumerable nuances that you can cover while studying both languages. There is no one winner in this race, but you can still study your project type and requirement to pick one. While Rust edges out C++ in performance, the latter steps out to offer a better community and tech support.