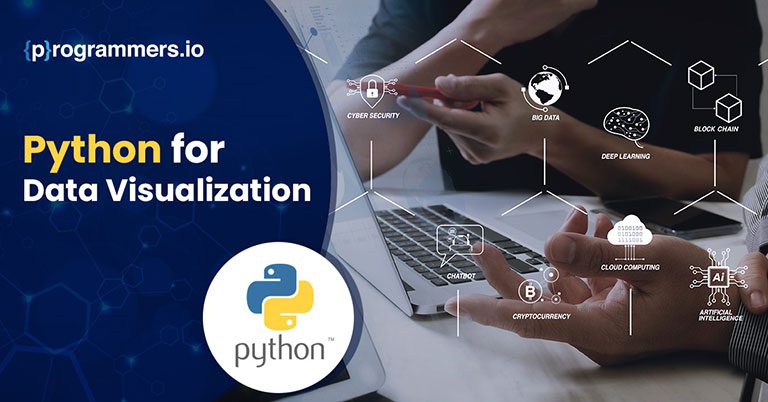 Humans are visual creatures. 90% of the information transmitted to the brain is visual. The human brain processes an image in a mere 13 milliseconds.

Visuals make for more engaging content, as well. Consumers retain 65% of information that contain visuals after three days. The retention rate for content without visuals is only 10%.

Which brings us to our question – should you hire dedicated Python developers to work on your data visualization projects?

We think so. And after you read our guide for using Python for data visualization, you will too!

Is Python the Right Tool for Data Visualization?

The data visualization industry is projected to be worth $7.5 billion by 2023. It’s been growing steadily by 9.47% each year and shows no signs of slowing.

This rapid growth means a corresponding explosion of data visualization tools. This can be an impediment to finding the right tool for your project. Too many data visualizations focus on the bells and whistles, forsaking actual usability.

They can also be prohibitively expensive.

These are just two more reasons you should hire dedicated Python developers – they can build the exact tool you need.

It’s important to understand some of the many different types of data visualization available so you can choose the right type for your project. That’s another advantage when you hire dedicated Python developers if you’re not sure what you need. A professional Python developer can help you pick the right digital tools to visualize your company data.

Matplotlib is perhaps the best known of the Python data visualization libraries. It’s a bit barebones for some applications but if you’re looking for simple, understandable charts and graphs that can be embedded virtually anywhere, Matplotlib’s a good choice.

Matplotlib is useful for visualizing both datasets as well as arrays. As such, it can handle all of the basic charts and graphs you could ever need such as bar charts or scatter graphs. It’s capable of far greater complexity as well, however, with more complex types of graphs like:

You can even use Matplotlib to visualize the connection between data points with tools like triplot or tricontour.

Matplotlib is one of the most established Python libraries for data visualization available. This is another of its great benefits as it means there are copious third-party tools that make use of the library. It also means there’s an extensive body of learning available to help you master the library.

There are very few problems that the extensive network of Python developers using Matplotlib can’t help you answer.

Seaborn is Python’s other most popular library for data visualization. It’s capable of creating more beautiful, elegant graphs than Matplotlib. If you’re looking for a library to create striking, engaging data visualizations, Seaborn’s a surefire pick.

Seaborn is easy and intuitive to install. It functions like any other library. You simply have to invoke Seaborn by including the following code in your Python program:

Once you’ve loaded Seaborn you can specify style and syntax. This gives you unprecedented control over your data visualizations.

With Seaborn, nearly everything is customizable. The plt.figure() function lets you set the scale of your graph. Sns.barplot() allows you to specify the variables for the X and Y axes.

There are native options for customizing your graph’s appearance, as well. Invoking sns.set_style(“darkgrid”) gives your graphs more of a darkmode appearance, for instance.

We’ll round things out with one final Python library for data visualization that is particularly popular. Plotline is based on the Grammar Of Graphics, a popular high-level tool for visualizing the most important elements of your data.

Plotnine is the Python equivalent of the popular Ggplot2 library for R.

With Plotnine, a lot of the variables are already set in stone via default settings. This makes it an ideal choice if you’re just looking to create some quick data visualizations without getting too intricate.

Plotnine is still plenty customizable, though. You can define virtually any argument you want to plot making a simple Python argument. This looks something like this:

Once you get used to looking at the code, you realize that Python is the ideal environment for creating data visualizations. Too many features can make for a confusing user experience. Including unnecessary data runs the risk of confusing your data visualizations and diluting your message.

You’ve come to the right place! Our Award Winning development team is certified in everything from Microsoft to Oracle. We’ve got all the tools you need to deliver your development project from idea to reality.

If you’re ready to hire dedicated Python developers to realize your goals, hire us today!