React Native has been developers’ favorite since its launch in 2015. Every business today is looking for cross platform app development to make it easier for the user to access it from anywhere. This requirement is best fulfilled by the React Native Framework. It is observed that React Native programmers are preferring it over Hybrid apps and the reasons are quite convincing. The increasing interest in React Native has doubled overtime as shown in the figure below: 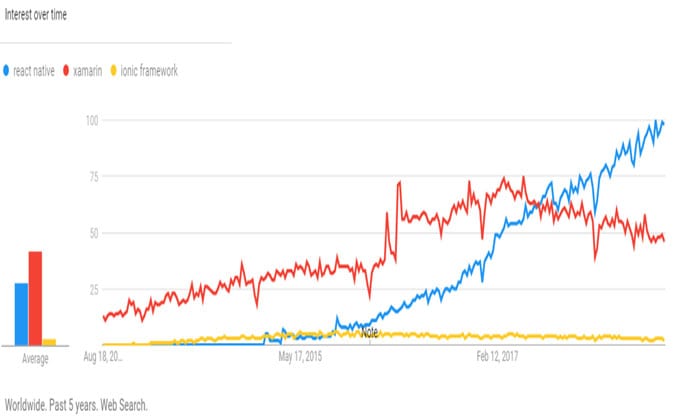 React Native is an open-source mobile application framework. It is used to build apps for all the platforms such as iOS, Android, Web etc. using a single codebase.

Hybrid, as the name defines is a combination. Here the combination is of web apps and a native environment. Hybrid apps are created using the same code in which the web apps are developed. On mobile platform these apps are launched inside a native container.

Here are a few reasons that prove the popularity of React native apps above Hybrid apps:

React Native apps are faster and well optimized as compared to Hybrid apps because React Native framework operates on the similar components on which the native Android or iOS apps are written. Whereas hybrid apps are wrapped in a native container offering a webview. They behave and run like a web app on the operating device. Hybrid apps follow the web apps and are not as efficient as the perfectly tailored React native UX.

React Native follows one motto – learn once write anywhere. It is unlike the typical native environments. As the developer does not have to code time and again for same application, it saves a lot of time and makes the project even more efficient. With the single codebase, React Native helps to minimize the time and effort in developing apps that run across all the platforms such as Android and iOS.

React Native is based on JavaScript framework and shares the programming model with ReactJS web language. Therefore, while building React Native apps, the developers use the same conceptual framework as utilized in ReactJS web app development.

React Native has always been in the news since its launch. It has pleased the developers with its features and regular updates, creating high interest among the React Native developers. Initially it did not support third party app integration, this created a lot of hassle for the native app development companies. Soon, the React Native Framework adopted the open source ecosystem that supports external integration. This has proved out to be a great success for React Native.

React native app builders are now available with features that add blocks with the reusable ‘native components’. These components can be compiled directly to the native apps. Besides this, React Native has complementary elements and components used in iOS and Android app development.

The Webview used in typical hybrid apps is outdated. The users now look for consistent and optimized look and feel of the apps. The reusable component-specific structure enables the React Native developers to create better web-based development projects. 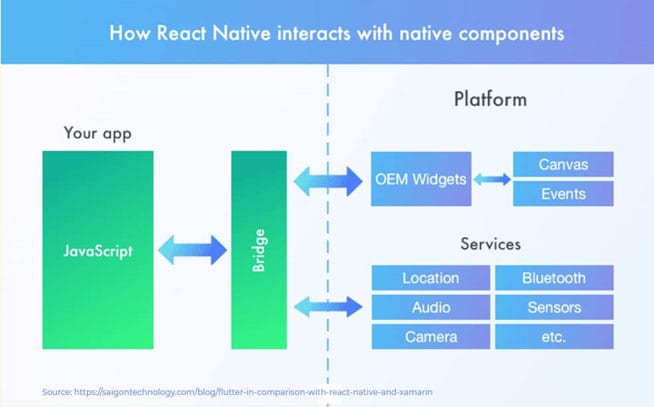 As you know React Native uses the same code on all the platforms therefore it has reduced the coding efforts. Eventually, if the coding is less, testing also takes less time hence enhancing the development process. The scope of errors and bugs is reduced in less lines of code. This feature is another reason to choose React Native application development over Hybrid applications.

React Native is a trustworthy platform that combines both native development with React. It is very easy to use React Native in your existing application or you can build an entirely new app from the scratch using it. Looking at the wonderful features mentioned above, you must have already decided with platform to go with, but it is always recommended to hire dedicated React Native developers from a trusted third-party service provider. Programmers.io is here to provide React Native developers in US. This extends your in-house team and you can easily focus on other important areas of the project.