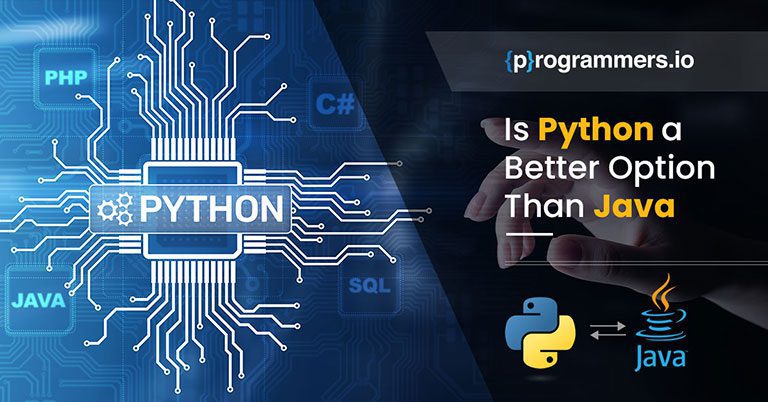 A programming language can best be understood as a group of commands, codes to design and instructions in one place. Programming languages used by developers are extremely integral to the overall software development process and determine the pace of operations and the quality of the end result.

Knowing the importance of the right programming language, it can be hard to choose between multiple options. There are multiple programming languages, with a few prominent ones that are trusted by many others and are leading the industry today. Java and Python are two such powerhouses and come with exceptional features and services.

Java is one of the most popular programming languages and features a high-level coding solution that is similar in nature to C++. Java programming is a strict program-oriented language and was made with the intention of providing coding opportunities that can be tackled from anywhere. The programming language also comes with minimal glitches and zero additional dependencies.

Check – Things you can do with JAVA

Python is a more contemporary offering in comparison to Java and is a general-purpose programming solution. Python is the go-to option for rapid application development, as it comes with built-in data structures that are further complemented with dynamic binding and typing. Python programming can significantly help reduce the cost of program development and maintenance.

Python is rated among the best in the market today because it helps provide a resource library with an interpreter. The solutions are available for free and can help save development costs in the long run.

We will run our comparison through different parameters and will evaluate both languages based on how they perform in all these parameters.

We will start our comparison with popularity. Both Java and Python have been the mainstream options when it comes to popular programming languages. A 2018 survey found out that Python was among the fastest-growing programming languages in the globe, especially after it had jumped passed C++.

While Python already had the tag of the fastest growing language, new stats suggest that it has also overtaken Java in the most popular category.

Python is extremely dynamic when it comes to coding and typing. Developers working on Python do not have to enter variables manually, as all variables are entered during runtime. This can help make Python an extremely easy language to operate.

Another benefit associated with Python when it comes to syntax is it does not follow enclosing braces or any rules when it comes to indentation. Python is extremely beginner-friendly in nature and can easy to learn and implement for newbies.

Java, on the contrary is really complicated to deal with, and has strict syntax rules. The learning process can also be complicated for individuals just starting to learn how Java works.

Java and Python are both run by compiling bytecode on virtual machines. Both languages can be operated across platforms, without any difficulties in the operating system. Most users might expect that they provide similar performance because of the similarities, but that isn’t the case.

Both Python and Java are fundamentally different when it comes to core operations. Codes in Python are processed through compile time, which makes the coding process more agile. Also, all tests on Python are conducted during the coding process. Any error caught within the code is addressed immediately, rather than wasting effort in back and forth.

As we have discussed above, Python is really easy to understand and get a hold of. Knowing the simple flow of operations, many people from different backgrounds have found Python easy to work on. Python is also used in machine learning, where it can help in providing simple and easy codes for better operations.

Python has assisted in the adaptation of machine learning protocols across multiple organizations and has also ensured a vast library of resources. Machine learning with Python becomes relatively easy, as it allows users to access a lot more resources and increase the pace of research.

Both Python and Java are implemented across pretty much every industry across the globe. Python has a strong community of over 1600 user groups. One famous group by the name of PyLadies includes 100 women, who meet regularly and code with each other on Python. The Python community is spread across 137 countries and has assisted many developers run operations on complex applications.

Python is best suited for the applications mentioned below:

The Python vs. Java debate is no more as competitive and challenging as it used to be. Having compared both languages through different parameters, we can clearly identify that Python is the better out of both of them. Python has outpaced Java in both growth rate and popularity. The language has achieved a lot on the back of better performance and is expected to achieve bigger things in the future.