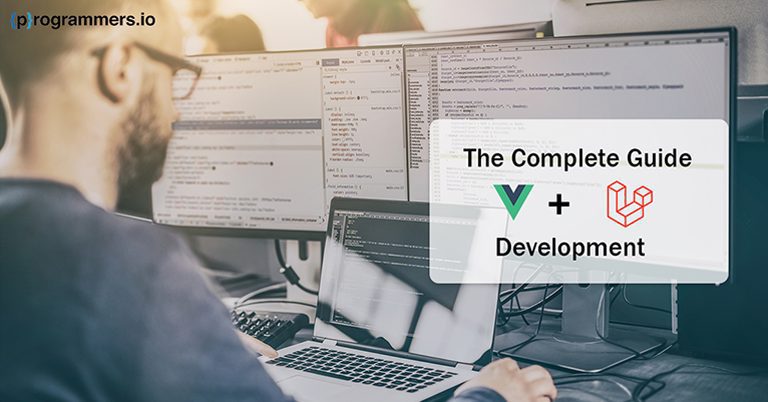 Software & Technology
By Akshay on February 2, 2022

Did you know that Evan You created Vue.JS in 2014? The open-source front-end JavaScript framework has since become very popular among developers. It’s also the perfect companion for the Laravel framework.

Have you considered using Vue.JS with Laravel? Do you understand how they work together and what the benefits are?

The following guide will explain why using Vue.JS Development with Laravel is an excellent choice for developers. Read on to learn how the combination works and why it might be right for your next project.

What Are Vue.JS and Laravel?

Laravel is an open-source framework originally released in 2011. It’s written in PHP and uses a Model View Controller architecture. It’s a very popular and widely used framework for developers to build Web Applications in PHP.

Vue.JS is a progressive framework for developing user interfaces. Its main focus is on an application’s view layer. Using Vue.JS with other platforms or applications is very easy. It’s an innovative way to make single-page apps.

Vue.JS lets Laravel developers create the front end so that their application doesn’t have to reload every time there’s an update. The combination has become a software trend because it streamlines the development process.

Vue.JS helps developers create a full-scale application. The application is event-driven and handles all activity on the front end. It also provides composable components for the user to use however they want.

Developers only have to make a few requests for data from their Laravel application because Vue integrates so well. It creates changes by simply switching components without having to reload the page.

The dependencies of every component get tracked automatically when it’s rendered. This allows the system to know exactly which component needs an update after a change in the current data.

Vue.JS is a very easy platform to learn for both novice and experienced developers. It has simplified options but also offers a lot of abstract features for innovation.

Valid HTML templates are also valid Vue templates. You have the option to keep your CSS external or directly process it with Javascript. This depends on your application’s specific requirements.

Developers also take advantage of scoped styling capabilities. They can apply style changes to a component whenever they want without the change affecting any other components.

How to Use Vue.JS With Laravel

Past versions of Laravel were automatically set up with Vue after every new installation. But you’ll need to set up Vue yourself in newer versions.

The Laravel user interface package offers an easy way to complete the setup. The first step is to create a new app by using Laravel’s installer. Then you will navigate into the directory where you created the app.

Next, you will need to install the Laravel/UI composer package. The package has some useful Artisan commands. They automatically scaffold out everything you’ll need to begin using Vue.

You’ll have to install and compile the newly added dependencies. Laravel might automatically add extra dependencies if you’re running it for the first time.

The app.js file is then compiled and saved. Using Laravel Mix to compile it generates the correct path. The mix helper also names the files.

Double-check that you have included a root element with an id of the app to your HTML scaffolding. Vue won’t know where to mount the components without the root element.

The Laravel user interface package makes a new directory in resources/js/components. It’s where you can add additional Vue components. You’ll see that the package also added an Example Component file.

You’ll need to register your newly created component with Vue. You can do this in Laravel through your main app.js file. The ExampleComponent is already registered at this point.

You have the option to create subdirectories to better organize your files. However, you must make sure the path in your require() method matches the directories structure.

You might notice that the Laravel user interface package makes several changes to your files. Remember that all the required packages were already added as dependencies.

The Vue packages were also added as dependencies. They’re needed to use compile single file components and use Vue.

Bootstrap’s CSS is written in SASS packages. It’s so that you can properly compile the packages into CSS.

You might want to complete the setup manually if you don’t need extra dependencies like Bootstrap. First, you’ll install npm dependencies.

Next, you’ll create a new directory named components in the resources directory. Then make a new file ExampleComponent.vue and fill it in with the necessary code.

You’ll need to register the components and initialize the Vue app. After that, you can add Vue support to Laravel Mix.

Compile all of your assets after adding Vue support. Make sure to run npm install for new projects. Update your HTML and make sure to add your compiled javascript file into your HTML views.

Finally, remember to have a root element with an id of the app. The manual setup of Vue is now complete.

Ready to use Vue.JS with Laravel?

Now you know the benefits of using Vue.Js Development with Laravel. You also know two ways to set up Vue in Laravel. We hope you give this terrific development combination a try.

Please contact us if you have any more questions about Vue and Laravel or to hire an expert.